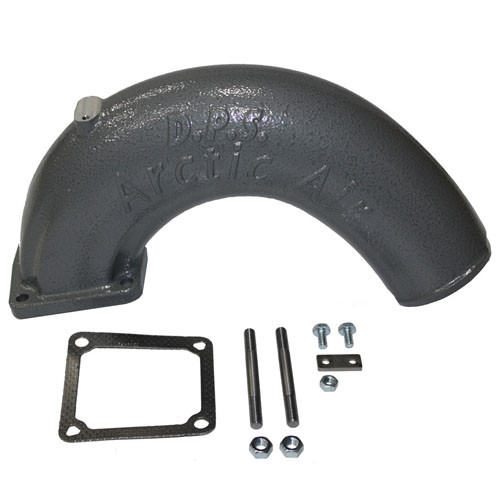 Based on technology used in NASCAR air tubes. Elogating through the curve eliminates air shrinkage of cross-sectional curvature tube area. This simply means better air flow through the curve. As air flows around a curve through a tube, the effective tube diameter shrinks as seen by the air, because of turbulence on the inside curve. The longer and sharper the curve the more the restriction. Only the Arctic Air Intake Manifold “Airhorn”, elongates the circular shape of the tube (makes oval), through the curve of the tubular section, allowing for full flow around the curve, instead of the narrowing effect of a round, or flattened tubular design. It means smoother, cooler, air entering your engine.

The stock or factory air horn is very restrictive because of the sharp bends, and narrowing between the bolt section, the air must “squish” and compress as it passes through. Many companies flatten their air horns through the curve also, this actually restricts airflow further, being the exact opposite of what air “want” as it goes through a curve.

On a stock engine we have seen anywhere from 15 to 25 more horsepower. Modified engines can benefit even more.

This will make for better power, fuel mileage, spool-up and cooler EGT’s. Not to mention it looks great to help decorate your engine compartment.

Cast from aircraft grade aluminum, the Arctic Air has seven pre-tapped ports in both ¼” and 1/8” NPT, for nitrous, water/methCNC, boost gauges, etc. for whatever you want to do. CNC machined for perfect fit, and strength to handle any boost pressure you can make. Comes with everything shown in the picture.