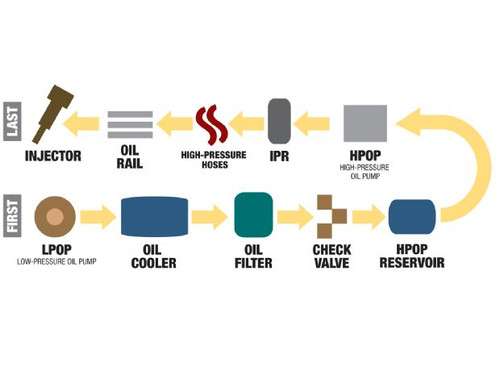 This is a free educational non-shipping article. The ad to cart button at $0.00, will not result in some sort of a shipment.

For those of you who haven’t spent much time around the Power Stroke name, the first 14 years of its production (the 7.3L and 6.0L) utilized a hydraulically activated, electronically controlled, unit injector (HEUI) fuel system. While this injection technology, developed by Caterpillar, is considered outdated today, it was thought of as a modern marvel when it was introduced in 1994. Diesel engine

competition in the mid-90s boiled down to the mechanically injected, inline-six 5.9L Cummins (found in the Dodge Ram), and the underpowered, indirect-injection 6.5L V-8 from GM. The 7.3L’s direct injection fuel delivery method and electronics allowed for computer-controlled timing advance, cleaner emissions, and the ability to make more horsepower and torque than the other two brands. Ford, with its marriage to International, jumped at the chance to offer the HEUI-equipped, Navistar-built 7.3L in its ¾-ton-and-larger trucks.

So how does HEUI work? And what components are involved? We’ll answer both of these questions, as well as detail the injector firing process in an HEUI injector. We’ll also offer some insight as to why the 7.3L’s HEUI system was so reliable in comparison to the 6.0L’s.

Unlike conventional injection pumps, the high-pressure oil pump does not create pressure. It creates a volume of oil for the injectors to use. The injection pressure regulator (controlled by the PCM) is responsible for creating injection pressures in a range of 450 to 3,000 psi on 7.3L engines

7.3L Injector Firing Process
1. When the electronic solenoid (A) gets energized by the IDM, it pulls the poppet valve (B) off its seat (it is held on its lower seat via a spring). This closes off the oil drain pathway and opens up the inlet for high-pressure oil.

injection pressure (entering the combustion chamber) at wide-open throttle. Aftermarket injectors equipped with larger plungers and barrels effectively reduce the multiplying force of the intensifier piston, oftentimes to 5:1 instead of the factory 7:1 ratio. A 5:1 ratio allows an HEUI injector to flow more fuel without requiring more oil volume.

3. The high-pressure oil on top of the intensifier piston

forces the plunger (D) down, which in turn forces the nozzle needle to lift, pressurizing the fuel in the plunger cavity, and ultimately opening the nozzle (E), sending fuel into the combustion chamber.

4. The void (F) leftover at the top of the injector (from the intensifier piston and plunger simultaneously stroking downward) is then refilled with high-pressure oil that has been waiting in the oil rails within the cylinder heads (fed there thanks to the IPR and high-pressure oil pump).

5. The nozzle (E) is very similar to a conventional-appearing nozzle, but the main difference is its use of a check ball, which seals during the downstroke of the plunger to prevent high-pressure fuel leakage.

*As you can imagine, the engine oil follows a very convoluted, lengthy path before it ever gets to the injectors. In addition to bottom and top end lubrication, engine oil is highly pressurized once it’s in the high-pressure circuit.

HEUI Glossary
ICP—Injection Control Pressure: This is what high-pressure oil pressure is referred to within the HEUI injection system (bottom number on gauge). The IPR sends ICP through the oil rails, and to the oil side (or top side) of the injectors.

ICP Sensor—A ceramic disc-type pressure sensor, the ICP sensor provides information to the PCM regarding the control of the high-pressure oil system. It converts pressure to a 0-to-5-volt signal, which the PCM uses to determine adequate injection control pressure (ICP).

IPR—Injection Pressure Regulator: A dump valve that converts the electrical output signals from the PCM to hydraulic pressure, thereby controlling engine performance. It’s in charge of the high-pressure oil pump’s outlet pressure, depending on demand, and in a range from 450 psi to 3,000 psi (and even higher in the 6.0L engine).

Duty Cycle—The portion of time during which the IPR is active. In the HEUI system, it’s often given as a percentage (top number on the gauge) and is a vital aspect to monitor during diagnosis or performance applications to ensure the high-pressure oil pump is keeping up with oil demand.

IDM—Injector Drive Module: Also known as an FICM (fuel injection control module) in 6.0L engines, the IDM sends a precise, electric current to the injector solenoid. The timing and duration are controlled by the PCM. On the 7.3L, the IDM’s pulse consists of 110 volts (120 volts on later engines) sent to energize the injector solenoid. On the 6.0L, the FICM’s pulse is 48 volts.

HPOP—High Pressure Oil Pump: A geardriven, hydraulic supply pump responsible for sending the required oil volume through the oil rails, and for the injectors to use.

The 7.3L’s Three Stages of Injection
1. Fill Cycle: In the first stage, the poppet valve is closed, the intensifier piston and plunger are positioned at the top of their bore, and the plunger cavity is full of pressurized fuel (between 40 and 70 psi).

2. Injection: The PCM sends the fuel delivery signal (110 to 120 volts) to the IDM, the IDM sends an electric pulse to the injector solenoid, and the injector firing process explained on page 162 begins.

3. End of Injection: A reversal of the second stage takes place. The PCM cancels the fuel delivery signal sent to the IDM, the IDM kills the electronic pulse sent to the injector solenoid, and the poppet closes, keeping any more high-pressure oil from entering the injector. Once seated, the poppet’s upper land opens its cavity to drain, pressurized oil above the intensifier piston flows out the vent holes in the poppet sleeve and out an adapter drain hole, and the intensifier piston and plunger move upward (forced up by leftover fuel pressure). Then the system is once again ready for the fill cycle.

*The same basic chain of events occurs in the 6.0L.

FAQ: What’s the difference between a 15-degree and a 17-degree HPOP on the 7.3L?
This question comes up often—mainly because 7.3L owners have been told the 17-degree high-pressure oil pump is better. The terms 15-degree and 17-degree come from the angle of the swashplate. The longer the stroke of the swashplate, the bigger the displacement—and the more oil volume it puts out. The ’94½ to ’97 and early ’99 engines all came with the smaller displacement, 15-degree pump. In an effort to keep up with the higher oil demands of split shot injectors on ’99½ to ’03 engines, the larger-displacement 17-degree pumps were used. Although the swashplate angle can vary from pump to pump—and very seldom is a later pump actually a 17-degree unit or an early pump a 15-degree unit—these terms have stuck as an easy way to describe an early vs. late-model pump. All HPOPs are interchangeable, so a higher-volume, 17-degree pump will bolt right up to an early 7.3L’s front cover and drive gear.

Poppet Valve vs. Spool Valve
The primary difference between 7.3L and 6.0L injectors is the valve that allows high-pressure oil to enter them. On a 7.3L, it’s a poppet valve (as shown in the diagram above). On a 6.0L, it’s called a spool valve. Both components carry out the same function, but the spool valve’s supertight tolerance works against it once dirty oil or contaminants are introduced, hurting longevity. To be fair, the spool valve (originally designed by Sturman Industries) is far more technologically advanced than the poppet valve’s design and functionality—it’s just unfortunate it isn’t nearly as reliable. While the poppet valve in the 7.3L injector eventually wears out, its larger internal clearances give it a longer service life (poppet valves typically last about 200,000 miles).

Multiple Injection Events
Emissions requirements for the 7.3L (’97 California models and all ’99 to ’03 engines), and then noise control on the 6.0L (early ’03 models) led to two injection events being commanded per combustion event. The 7.3L received split shot injectors, which featured a notch in each plunger and barrel. When the high- pressure oil forces the plunger down (courtesy of the intensifier piston) for a short period of time on the downward stroke, no fuel is flowing (as the two notches line up and fuel is bled off). This allows a small shot of fuel to be injected, then a larger (main) event occurs just nanoseconds later.

For the 6.0L, the dual injection event was performed electronically rather than mechanically. Called pilot injection, it was controlled by the PCM and was used at idle in an attempt to quiet down the engine. Unfortunately, the injectors weren’t able to react fast enough to carry out pre- and main-injection events, causing rough idle issues. Ford quickly did away with the pilot injection feature.

By Mike McGlothlin
Enjoyed this Post? Subscribe to our RSS Feed, or use your favorite social media to recommend us to friends and colleagues!